Visit the city that never sleeps. If you’ve never been, New York City is abuzz with activity all year round. In New York City, there’s no shortage of things to do, sites to see, restaurants to try, people to watch and places to visit. In Times Square (a tourist’s mecca) alone, there are hundreds of activities and points of interest. Often called the “Canyon” because of the open space surrounded by soaring buildings and lights, Times Square is the most-visited tourist attraction in the world. 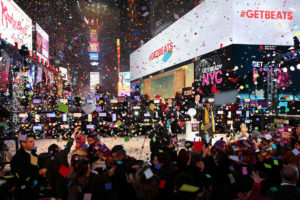 Now that you’re convinced you to want to visit New York’s Times Square for New Year’s Eve, it’s a matter of getting there. It’s understandable if you don’t want to drive yourself or your family – the heavy congestion is a big turnoff! Why not take the bus? It’s a practical, affordable, safe and a fun way to see New York City and have a positive experience.

Atlantic Charter offers you a safe and convenient way to rent a charter bus to get to Gotham for your New Year’s Eve plans. Whether you have a small or large group – or even if you’re traveling by yourself to meet friends – our charter bus rentals are guaranteed to eliminate the stress. Our buses offer the following standard features:

So, whether you’re considering a day trip or an overnighter, Atlantic Charter can make sure your next trip to the Big Apple a Big Success. Call us today and get ready to ring in the new year!